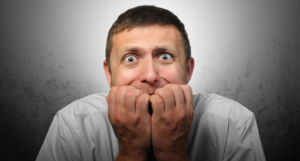 In this “season of fright,” it seems fitting to pose an important question. Which should scare us more: the presence of chronic pain, or the treatments aimed at addressing that pain?

Time marches on, and it marches all over some of us more than others. The prevalence of degenerative neurological disorders and degenerative musculoskeletal disorders increases with aging.  In an aging society like ours in the United States, that means cases of chronically painful disorders are only going to continue to rise. At the same time, not every physiologic abnormality is correctable. In some cases, the “right treatment” may actually turn out to be unnecessary. Information published in the Journal of the American Medical Association earlier this year indicates that as many as a third of the total knee and hip replacements in the United States were not needed.

Despite all our technological advances, medication for pain is the sometimes the best we can do for patients. Oceans of ink have been consumed to publish stories about cases of opioid-related deaths. Tragic as those cases are, they are actually quite rare (especially with regard to prescription opioids). The Substance Abuse and Mental Health Services Administration (SAMHSA) reports 11.5 million people misused prescription opioids in 2016, and 17,087 deaths occurred from misuse of prescription opioids that year. In other words, >99.85% of the people who misused prescription opioids in 2016 did not die as a result of that misuse. Unfortunately, many patients are now so scared to try treatments which may very well improve their functional independence that they have essentially been condemned to die in pain, unnecessarily.

Instead of more governmental or insurance restrictions on prescribing medications for pain, healthcare providers need better education about relative risks and relative benefits of various treatments. At the same time, patients need access to the safest, most effective treatments on the market. For instance, one opioid medication has been available only since 2009. However, it has been prescribed millions of times around the world, and is as effective as oxycodone for pain. Despite its efficacy for pain, it has not resulted in any known accidental overdose deaths (not even in cases of accidental ingestion by children). Still, many patients with chronic pain have never been given the opportunity to try it due to coverage limitations by insurers.

Julius Caesar has been quoted as saying, “It is easier to find a thousand men who are willing to die than to find one who is willing to endure pain with patience.” I have to agree. In this day and age, there is plenty to fear. However, one thing we should not have to fear is regression with regard to the health sciences and availability of options to treat pain.

Founded in 1998, Pain Consultants of East Tennessee is a multi-disciplinary pain management practice who has been designed a Center of Excellence by the American Pain Society.